Slightly late posting these as I was away at the end of the month but here it is, my round-up of everything I’ve read in the lovely month of March!

A Secret History of Witches by Louisa Morgan

“‘It’s true, ma petite. If they know – if they discover what we are – they will try to kill us’

Brittany, 1821. After Grand-mere Ursule gives her life to save her family, their magic seems to die with her. Even so, the Orchieres fight to keep the old ways alive, practising half-remembered spells and arcane rites in hopes of a revival. And when their youngest daughter comes of age, magic flows anew. The lineage continues, though new generations struggle not only to master their power, but also to keep it hidden.

But when World War II looms on the horizon, magic is needed more urgently than ever – not for simple potions or visions, but to change the entire course of history.

A Secret History of Witches is a moving historical saga that traces five generations of fiercely powerful mothers and daughters – witches whose magical inheritance is both a dangerous threat and an extraordinary gift.”

Loved this book! It’s beautifully written and every character through each generation is so well fleshed out that they each felt real to me. The characters are strong, flawed and at times very frustrating but all unique. I found some of the Orchierre women’s stories more gripping than others and have to admit I found the Queen Elizabeth/ War scenario a little bit far fetched but it’s so lushly written that I can forgive it. A heart-breaking and bitter sweet read.

“From human to vampire …

Marcus Whitmore was made a vampire in the eighteenth century. Over two hundred years later, he finds himself in love with Phoebe Taylor, a human who decides to become a vampire herself.

But her transformation will prove as challenging now as it was for Marcus when he first encountered Matthew de Clermont, his sire.

While Phoebe is secreted away, Marcus relives his own journey from the battlefields of the American Revolutionary War, through the treachery of the French Revolution to a bloody finale in New Orleans. His belief in liberty, equality and brotherhood challenged at every stage by the patriarchy of the de Clermonts.

What will he and Phoebe discover in one another when they are finally reunited at Les Revenants, beneath the watchful gaze of Matthew and his wife, Diana Bishop?

Sunday Times Number One bestselling author Deborah Harkness returns to the spellbinding world she created in A Discovery of Witches and, through the prism of an unconventional love story, explores the power of tradition and the endless possibilities for change.”

A very enjoyable journey back into the All Souls universe. I was pleasantly surprised to see so much of Diana, Matthew and the twins in this book as, being as it is Marcus and Phoebe’s story, I wasn’t expecting them to be in it as much as they are. It felt like popping in to visit old friends and I loved getting to see more of Diana and Matthew’s parenting struggles and their attempts to understand their children’s duel natures.
I admit it took me a little while to warm up to Marcus’ back story but once I did they became some of my favourite parts of the book. Time’s Convert journeys back to Marcus’ mortal youth in Hadley, MA, his time fighting in the American civil war and of course, a fateful meeting with a certain French nobleman, the Chevalier De Clermont. Marcus’ was a fun new perspective with which to view the eccentricities of the De Clermont family, and what it means to become a member. I enjoyed the glimpses of familiar faces (Phillipe, Gallowglass etc.) and getting better acquainted with some of the lesser known family members, Freya in particular.
I wasn’t quite as gripped with Phoebe’s story, I just don’t personally feel that much of a connection to her as a character. That said, it was still interesting to learn about the vampire transformation process through her eyes.
Overall, a great addition to the All Souls universe and I’m looking forward to reading the next one!

Taking a minor diversion away from novels and into the world of graphic novels we have:

“The Eisner Award-winning “Best New Series” from BRIAN K. VAUGHAN and CLIFF CHIANG continues with a bold new direction, as intrepid young newspaper deliverers Erin, Mac and Tiffany find themselves launched from 1988 to a distant and terrifying future… the year 2016”

A fun read and an enjoyable follow up to vol.1. I still pretty much have no clue what the F is going on but I’m enjoying the wild ride regardless. Paper Girls is feisty, witty, super tongue in cheek and generally a bit bat shit crazy but I have a feeling that once I’ve powered through the confusion, the pay off will be worth it.

And back into the world of novels and, no surprises, more witches:

The Familiars by Stacey Halls

In a time of suspicion and accusation, to be a woman is the greatest risk of all . . .

Fleetwood Shuttleworth is 17 years old, married, and pregnant for the fourth time. But as the mistress at Gawthorpe Hall, she still has no living child, and her husband Richard is anxious for an heir. When Fleetwood finds a letter she isn’t supposed to read from the doctor who delivered her third stillbirth, she is dealt the crushing blow that she will not survive another pregnancy.

Then she crosses paths by chance with Alice Gray, a young midwife. Alice promises to help her give birth to a healthy baby, and to prove the physician wrong.

As Alice is drawn into the witchcraft accusations that are sweeping the north-west, Fleetwood risks everything by trying to help her. But is there more to Alice than meets the eye?

Soon the two women’s lives will become inextricably bound together as the legendary trial at Lancaster approaches, and Fleetwood’s stomach continues to grow. Time is running out, and both their lives are at stake.

Only they know the truth. Only they can save each other.”

Absolutely loved this book, it was so gripping, sometimes creepy and often heart-breaking. I’ve always been fascinated by the Pendle witches and Stacey Halls’ novel puts a really interesting spin on events from the unique perspective of 17 year old noble woman Fleetwood Shuttleworth, based on the real-life mistress of Gawthorpe Hall during the witch trials.
In Halls’ story, Fleetwood is pregnant for the fourth time, having miscarried her first three children. Desperate to provide an heir for her husband, Fleetwood seeks help in the form of midwife and local wise woman Alice Grey. Fleetwood and Alice quickly form an unconventional but deep friendship but during this era of fear and superstition, it isn’t long before Alice becomes embroiled in the accusations of witchcraft that sweep the county of Lancaster. The novel follows Fleetwood’s efforts to save her friend and, in doing so, save the lives of herself and her unborn child.
Fleetwood’s character progresses really beautifully from a naive, uncertain young woman to a brave and determined mistress of Gawthorpe. I really felt her anger and frustration at her husband and, particularly, his friend Roger, who’s quest for power and influence drives him to condemn an innocent woman.
This book does a wonderful job of portraying the struggles of women during this time, particularly poor women who are just trying to do their best to provide for their families and protect them from the many dangers and illnesses that threatened them. Even Fleetwood, a wealthy noble woman with an influential husband and powerful friends, is not immune to the threat
I found The Familiars a real page turner, each chapter containing just enough breadcrumbs to urge the reader to continue reading and discover where the trail leads. A lovely, fascinating read. Not to mention that the cover is to-die-for pretty!

Last but certainly not least, a re-read of an old favourite: 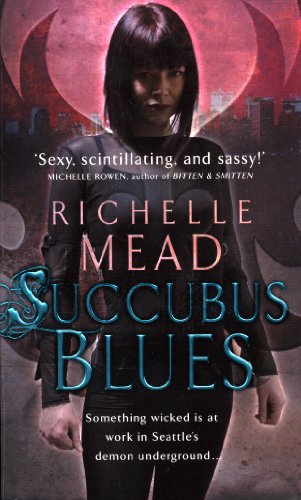 “When it comes to jobs in hell, being a succubus seems pretty glamorous. A girl can be anything she wants, the wardrobe is killer, and mortal men will do anything just for a touch. Granted, they can often pay with their souls, but why get technical?

But Seattle succubus Georgina Kincaid’s life is far less exotic. Her boss is a middle-management demon with a thing for John Cusack movies. Her immortal best friends haven’t stopped teasing her about the time she shape-shifted into the Demon Goddess getup complete with whip and wings. And she can’t have a decent date without the sucking away part of the guy’s life. At least there’s her day job at a local bookstore – free books; all the white chocolate mochas she can drink; and easy access to bestselling, sexy writer, Seth Mortensen, aka He Whom She Would Give Anything to Touch but Can’t.

But dreaming about Seth will have to wait. Something wicked is at work in Seattle’s demon underground. And for once, all of her hot charms and drop-dead one-liners won’t help because Georgina’s about to discover there are some creatures out there that both heaven and hell want to deny…”

Richelle Mead is one of my all-time favourite authors so it should come as no surprise that I love this book! It’s been a good ten years since I first read it and I’m pleased to say it still holds up for me as one of my all-time favourites. I love the sharp, witty repartee of the characters, there are several moments in this book that still have me giggling out loud.
I know a lot of readers find Georgina to be an unlikeable heroine but personally I find her mistakes and imperfections to be part of what makes her a well-rounded, believable character. Is she sometimes self-centred, self-pitying and inconsistent? Sure, but so is pretty much every human being who walks the earth and whilst Georgina may not exactly be human, the point still stands. She’s also funny, smart, warm and genuinely caring towards her friends.
The romance in the story with Georgina’s two main love interests feels genuine and believable, I can totally see why she is drawn to both Seth and Roman in completely different ways. Plus I love Seth as a character in his own right. Georgina’s slow unravelling of his personality is one of the joys of this series for me.
Richelle Mead manages to strike a balance between the romantic plot and the main “vampire hunter” murder plot without either thread feeling neglected. In terms of the main-plot itself, it never feels particularly high stakes or tense and none of the characters involved seem to be overly concerned by the threat up until it all comes to a head, but it’s intriguing enough to keep me reading and the ride itself is just a lot fun 🙂

Phew, busy month for reading! More reviews coming up for April including The Wicked Cometh by Laura Carlin, Deadly Class Vol.1 by Rick Remender. Might even re-read another Georgina Kincaid if I’m feeling particular indulgent 🙂

**Side note** I don’t receive any payment or free copies in exchange for reviews, all reviews are just for fun and out of the goodness of my book lovin’ lil’ heart ❤

Writer of upcoming urban fantasy series The Cauldron Born. Lover of all things witchy and supernatural. Typical Aquarian. View all posts by thecauldronborn